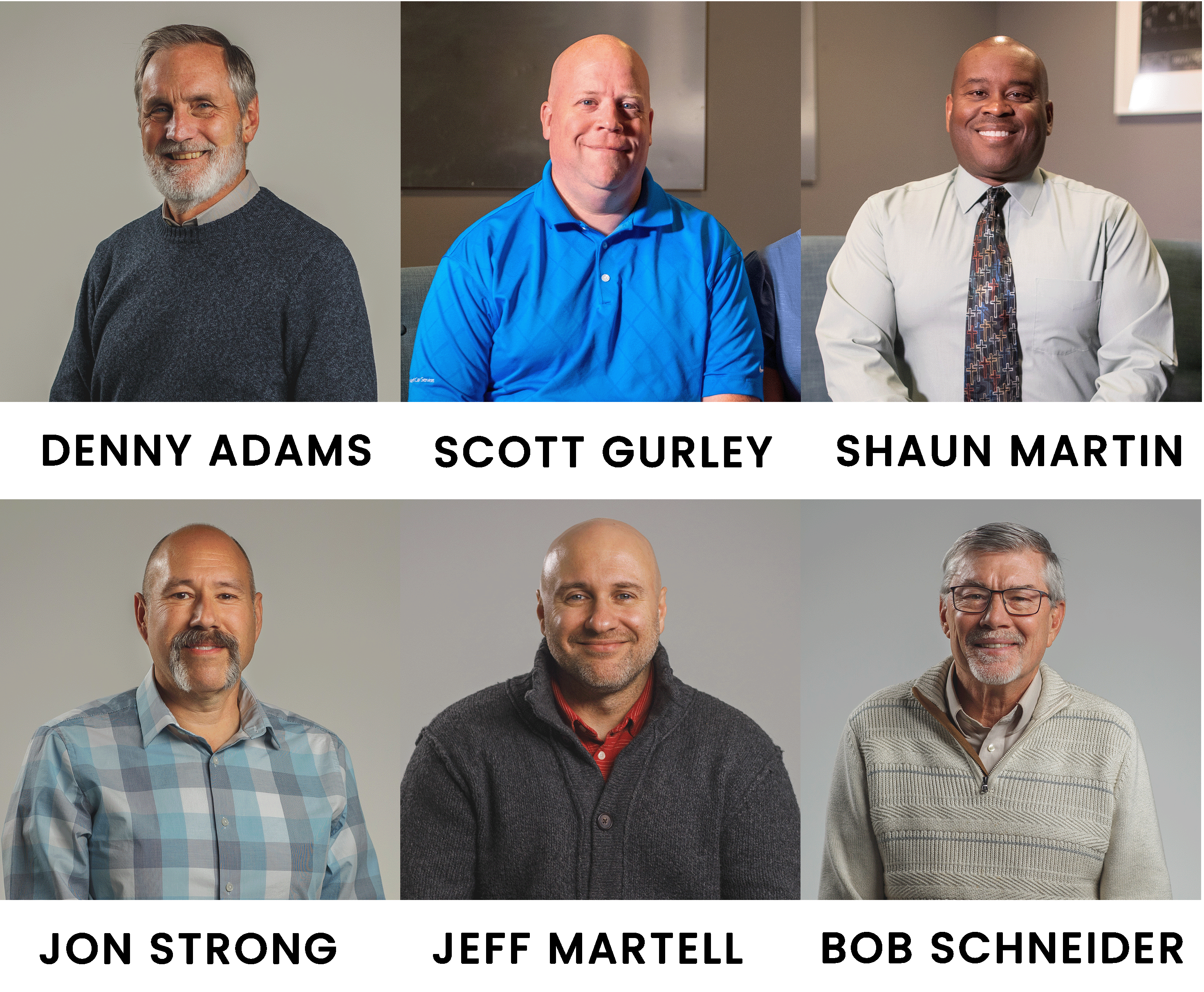 These leaders were affirmed in an Akron Member Vote on Sunday, Dec. 11, 2022 to serve on The Chapel Akron's Elder Oversight Board. Four of these men are lay elders and two of them are pastors. In case you don't know some or all of these elders, here is some background information that you may find helpful.

Denny Adams has sensed God’s pull to serve in various ministries during his 48 years at The Chapel. He was a leader in Christian Service Brigade focusing focused on ministering to MS and HS boys and their fathers for 25 years. He and his wife, Pam, enjoy ministering together – continuously attending ABFs while leading Bible studies and engaging in short term mission trips. They now serve as a Next Gen couple for The Chapel’s Young Adult Ministry (YAM), hosting a weekly life group in their home.

Denny accepted Christ as his personal Savior in 1974 during his freshman year at The University of Akron. Discipled by faithful men, he began attending The Chapel, Bible studies in his dorm, and Navigator conferences. Married in 1977, Denny and Pam have three adult children and five grandchildren, all of whom live in the area and – through God’s grace – walk with the Lord.

In 2020, Denny retired from a rewarding 37-year career with Lockheed Martin and continues to work part time as a consultant for Lockheed and for a small tech business. He enjoys collaborating with and leading small teams – and admits that he “occasionally strays into geekdom.”

Scott Gurley teaches an ABF on Sunday mornings and has also been teaching the membership and baptism classes here in Akron for the past 10 years. He has previously served on The Chapel’s Board of Trustees.

Scott grew up in a Christian home and remembers accepting the gospel message as young as 6 years old and “never turning back.”  While attending college, the gospel exploded in his heart and firmly took root as he moved away from his family and took on independence – not only in his life, but also in his faith.

Scott and his wife, Deb, have been married for more than 19 years and have attended The Chapel since they moved to Ohio in 2002. They have three children --  a freshman at Tallmadge High School, a sixth grader at Tallmadge Middle School, and a third grader at Cornerstone Community School. Their family has also been doing foster care for the past four years.

Scott tries to integrate his faith in Christ in all aspects of his life – at work, in his neighborhood, at home and at church. His hope and prayer is that Christ would be at the forefront of all he does – even while doing everyday activities like playing board games with his daughter or watching football with his sons.

Shaun Martin serves on the Board of Directors at Haven of Rest Ministries and was previously Board Chairman and project manager at Morning Star Farm Ministries. Shaun enjoys attending, participating in, and helping to lead his ABF men's Bible study at The Chapel.

Shaun grew up in a Christian home, but while his family went to church weekly, none of the churches they attended expressed the importance of a personal relationship with Jesus Christ.

That all began to change for him when he met his future wife, Gwen, while attending The University of Akron. “She was very adamant that we attend a church,” Shaun recalls. Because The Chapel was so close to the university, it was an easy choice for them. They began attending here in 1996 and were blessed by the teaching of Pastor Knute Larson and the counsel of Pastor Wes Hartzfeld who married them in 1997 and whose ABF they attended for three years. Shaun was baptized at The Chapel by Pastor Jody Bowser in 2001.

Shaun and Gwen have three children – two sons and a daughter. Serving the homeless community and watching God work through some that seemed down-and-out but are now thriving is amazing, he says. “It's incredible to see people in this community work through their life circumstances and then come to Christ and become children of God.”

Jon Strong has been serving at The Chapel for decades working in everything from kindergarten missions to elementary and middle school ministries to high school, where he currently serves as a leader.

One of seven children, Jon was raised in a Christian home and blessed with a godly heritage. He accepted Christ at an early age, but says he really began to own what it meant to follow Christ at the age of 18 when renewed his commitment to the Lord.

Jon came to The Chapel in 1977, met his wife, Jill, while attending our college ministry and was baptized here when he was 20. Jon and Jill currently have three children and four grandchildren – all of whom live in the area.

Jon works in the technology industry with leadership experience at large companies, small startups and his own network engineering consulting firm.

With a heart for missions and the consistent support of his wife, Jon was able to lead many short-term trips for youth and to Mozambique. He is an active member of The Chapel Board of Trustees and currently serves as Board Chairman.

Excited about the future ministry of our church, Jon says he shares the vision for where we are headed and is excited about the prospect of being a steward and facilitator of this vision while working alongside other godly men on the new Elder board.

Pastor Jeff Martell has a long history of service to our Lord and to The Chapel. Jeff stepped into a leadership role here in at our church in Akron almost exactly a year ago. In the short time since, he has played an integral role in moving us forward through a challenging season of healing and transition.

Right now, Jeff is facing a fierce personal battle with cancer. He needs our prayers and support now more than ever. Please join us in praying fervently for Jeff, his wife Marcia, and their children, Luke and Natalie in their time of need. Please ask our all-powerful and merciful God to bring healing and comfort to Jeff and provision and peace to his family.

Bob Schneider served on the pastoral staff of The Chapel for 37 years, first in adult and discipleship roles then becoming Missions Pastor here until his retirement in 2017. In 2022, Bob rejoined the staff in a part-time Care role that includes leading a vibrant seniors ministry for older adults. Over the years, Bob has taught and led a number of Sunday school classes, home groups and ABFs – two of which he continues teaching today.

Bob committed his life to Christ in 1969 after hearing a gospel presentation from Campus Crusade for Christ. As his faith grew, he found his way to The Chapel where Pastor Dave Burnham’s clear teaching became a catalyst for Bob’s spiritual growth. Because Bob couldn’t openly share his faith in his job as a social worker, he decided to change careers and pursue full-time ministry. He graduated from Trinity Evangelical Divinity School in 1980.

During his tenure as The Chapel Missions Pastor, Bob was president of the National Association of Missions Pastors (NAMP), served on the boards of several mission agencies and was an instructor of the Perspectives on the World Christian Movement course. Before retiring, he wrote a book on the history of Chapel missions called Blessed to Be a Blessing.

Bob’s wife, Myra, was always a huge part of his ministry. Together, they travelled to more than 30 countries to visit missionaries, speak at conferences and train pastors and church planters. Myra passed away from cancer in October 2018.

Bob currently serves on the boards of Akron Pregnancy Services, Northeast Ohio Right to Life and the Tell Foundation. He has three married sons and 10 grandchildren and tries to stay involved in his grandchildren’s lives – making their birthdays, games and times together a high priority.

What is an elder at The Chapel Akron? What does serving on the Elder Oversight Board entail?

They listen to the Lord and help shape and implement the vision of the church. They are accountable to God for the well-being of the flock and to pray for the sick. They are to be mature, godly examples for the church of a life in Christ well-lived.

What time commitment will be required of our elders?

As the highest-level leaders in the church, a sacrifice of time will be required to serve in this role. We are estimating an average of 7-10 hours a week would be required. This would include formal board meetings, sub-group meetings, one-on-one meetings with congregants, discipleship relationships and other serving responsibilities (like teaching an ABF or small group). For most of us, this is no small time commitment in lives that are likely already busy. But availability is crucial to shepherd the church properly.

How long is their term of service?

The term length for serving on the oversight board is three years. Most will cycle off the board after that time. However, there is a possibility to serve two consecutive terms, if both the elder and the oversight board so desire. This provides enough time to become acquainted with the needs of the church and elder responsibilities, while maintaining accountability and safeguards.

What does the Bible say about elders?